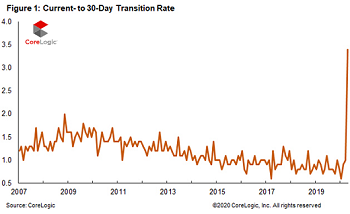 Not since the 1930s have we seen housing and unemployment this bad. In addition, 12 million renters face eviction due to no rental payments for at least three months. Wolf Street points out that delinquent mortgages are the highest since 1999.

Transition from “Current” to 30-days past due:

In April, the share of all mortgages that were past due, but less than 30 days, soared to 3.4% of all mortgages. That percent is the highest in the data going back to 1999. This was up from 0.7% in April last year. During the Housing Bust, this rate peaked in November 2008 at 2% (chart via CoreLogic):

The rate of these early delinquencies soared to 4.2% of all mortgages, the highest in the data going back to 1999. This was up from 1.7% in April last year.

As of April, this stage had not yet been impacted, with the rate remaining relatively low at 0.7% (up from 0.6% in April last year). This stage will jump in the report to be released a month from now when today’s 30-to-59-day delinquencies that haven’t been cured by then move into this stage.

Serious delinquencies, 90 days or more past due,

including loans in foreclosure: As of April, there is no impact on this stage, and the rate ticked down to 1.2% (from 1.3% in April a year ago). We should see the percentage rise in two months and further out.

So far, the government has been fighting evictions and foreclosures by declaring a moratorium on both, but that ran out toward the end of July. President Trump signed executive orders to extend the moratoriums, but some argue that it was a political stunt.

At his golf club in Bedminster, N.J., Trump announced he was postponing payroll taxes through the end of the year, extending the unemployment “bonus” at $400 a week (down from $600), helping people “stay in their homes” and waiving student debt payments through the end of 2020. The details, however, are not as generous as he made them sound.

For example, Trump has said many times in recent days he wants to prevent evictions, but his latest executive order does not ban evictions. Instead, Trump calls for Health and Human Services Secretary Alex Azar and Centers for Disease Control and Prevention Director Robert Redfield to “consider” whether an eviction ban is needed.

I suspect we will see the Trump administration do everything it can to delay all foreclosures until after the November election. It wouldn’t be good to see thousands of evictions and the news carrying images of people kicked out of their homes. You now have until 2021 to learn all you can about investing in notes and deeds.

, the “Cashflow Chick,” Founder of The Tryllion Group, Investor/Entrepreneur having done $150 Million+ in real estate transactions; Specializing in Non-Performing Notes. She has been a regularly featured guest on “The Cashflow Guys” podcast, and you can also find her on many other Real Estate and Entrepreneurial podcasts, and in the Wall Street Journal as well.  She also speaks at various Real Estate Investing clubs and conferences across the country. Paige teaches the “Building Wealth with Notes” Workshop that drills down into the details of how to successfully buy Non-Performing Notes, create passive income, and mitigate risk. www.CashflowChick.com/training

Surviving the crash of 2007, Paige knows how “life happens” every day. Her passion is to help people build wealth, secure their financial future, to enjoy life, and to be ready-not broken! Whether it is improving communities one house at a time, helping borrowers stay in their homes, or working with other investors to learn a new way to earn higher investment dollars for their retirement years potentially, Paige dedicates herself and her business to helping people improve their lives in every way.  For more information got to www.CashflowChick.com